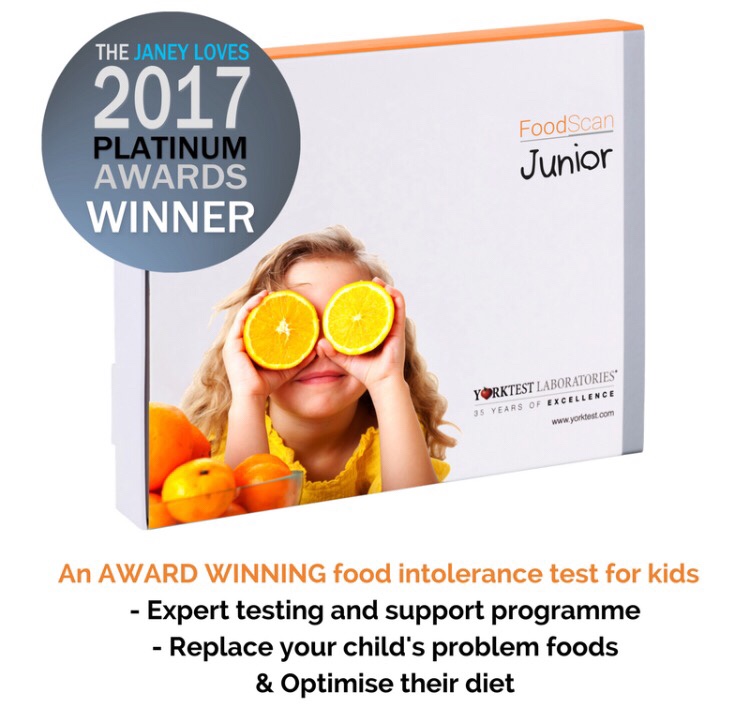 So, after our first experience with Kinesiology and being told that Ellie was having issues with her gut and that she was intolerant to wheat, dairy, cows milk, oats and potato we went hell for leather and took all of those things out of her diet.

We’d already asked at the doctor’s whether intollerance testing was available on the NHS – but it was restricted to allergies.  The difference between them is; an allergy will show up almost immediately (such as a rash or vomitting) but an intolerance can happen several days later, which makes it doubly hard to work out what nasty food caused it.

I can’t remember how we came across The York Test – whether it was Dr Hillary on Good Morning TV or if it was word of mouth, but we found ourselves Googling it and forking out the £200+ on this comprehensive intolerance test which looked at 113 foods from a small sample of blood.

So, we ordered the kit, pricked Ellie’s finger and sent the sample back.  The results took a few days to come back… and there it was – Wheat, Gluten (Gliadin) and Cow’s milk, with a borderline result on Beef and Yeast.

So, we continued with the diet and very slowly, we saw improvements from what we experienced in those dark winter months.  There was still such a long way to go.

I’m not going to lie, it was hard work.  Constantly planning ahead and taking a rucksack of food everywhere we went.  Watching Ellie’s every move – she was two, she didn’t yet understand that she couldn’t have the biscuits at play group and why did mummy have a special one.

The ‘Free From’ aisles were a lot smaller than they are today, and didn’t even exist in some supermarkets. There was very little ordering on-line – we weren’t that computer savvy back then anyway!  There was also very little choice if we went out for a meal – it was usually baked potato and beans as everything else would have some kind of a coating on them.

We were so lucky to have family on our side with these big changes to Ellie’s diet.  I’ve read stories where family members don’t get on board, not believing it makes any difference and sneaking little treats because ‘one won’t hurt’.  There were several occasions where it only took one little mishap for Ellie to be really poorly a few days later.

I know that back then I would never have done it without my mum’s help.  She was amazing.  She would be constantly researching, trying out recipes for biscuits and bread made of  different flours and scouring the supermarket aisles for foods that Ellie can eat. She would be so excited ringing me up to tell me that she’d found something tasty that Ellie could have.  I miss that so much.

Oddly, I seem to find myself in a similar situation right now.  Ellie’s behaviour has gotten pretty erratic lately – and whilst we’d been putting it down to hormones, grief and moving up to secondary school for the past year, something doesn’t sit right.  Call it Mother’s Instinct.   I’m now considering doing another York Test to see to what extent these foods are not agreeing with her… because its bloody hard finding Gluten free food without Rice, Corn and Egg as a substitute for a non-stop eating Tween!

So I’ve once again taken to the baking today… Cherry and Walnut Squares made with coconut oil, maple syrup, ground almonds, etc etc. I had to use an egg substitute and it didn’t turn out quite right… but practice makes perfect… or edible!

Ok, so they were actually pretty nice… they just didn’t turn out quite like the picture from the ‘The Foodie Teen’ book!!

So, I've started a blog... mainly about everyday things... usually to do with Austism (Aspergers) and having a Tween with it. I'm blogging for me, as a form of therapy I suppose, but if I can help anyone out there, then that would be amazing. I'm a mother of two beautiful kids... who give a lot of joy and laughter and also drive me up the wall! Thank god for wine, that's all I can say! View all posts by Mother's Daughter

Rediscovering old toys. These puppets have been out for days after not being looked at for years! Have your children rediscovered old favourites during ‘lockdown’? . . . . #lockdownlife #lockdown #stayhomestaysafe #homewithkids #oldtoys #oldtoysarebest #puppetsofinstagram #puppettime