Oooooh, that sounds a bit deep…. probably is for a Sunday morning tbh, but then I’ve had a good night’s sleep to recharge so this blog may be a little more coherent than it would’ve been last night (and not because of drink for a change!).

I have to be honest, we’ve probably had the worse start to a six weeks holiday in terms of Ellie’s behaviour… and its really starting to take its toll.

So, I’m going back to yesterday… We’d had an OK Saturday afternoon.  We took the dog for a nice walk, rewarded ourselves with a couple of cheeky afternoon drinks in the lovely pub with the beer garden and play area (keeps George happy!) before strolling back, picking up some grub and spending the evening in the hot tub and garden.

We were enjoying a game of ‘Adults vs Kids’ (general knowledge questions) whilst sat in the tub and as usual, Ellie is talking in an aggressive loud voice to ask the questions.  The simple request for Ellie to use a ‘talking voice’ started it all off.  She then started to panic about what tone of voice to use and started getting aggressive towards her brother who only ever tries to help her.   After 10 mins of me keeping calm I decided that I was getting far too hot in the tub (it was at 40 degrees!) and hubby and son agreed to which Ellie ranted at us “Why do you all hate me so much?”.

We’ve had similar meltdowns most days since the holidays started – I’ve even started to keep a diary of them. They were starting to manifest well before the holidays – I’d mentioned them in the annual review at school, but now they are getting out of control.  The scariest part was when Ellie came back downstairs (after being asked to go up and calm down) shouting that she was ‘calm’ (I think not!) and shaking on the sofa saying she was scared that the three of us were going to hurt her!  WTF!!!  Where the hell had this come from?  I know she says some ridiculous things sometimes but this was at a new level! She was looking so confused and ‘different’.  I can’t explain it.

Now, I know that there will be parents reading this who will think ‘ Yeah… And?’ as this is a daily occurrence – outbursts, meltdowns and for some, physical aggression.  This however, is new territory for us, and I (we) are having real problems coping with it.

Lately, the anxiety, paranoia and the aggression has noticeably increased and I’m at a loss with what to do?   Most people have said that it will be her hormones at work, which is probably true and up until now, that’s what I’ve put it down to.  But at what point can it start to be something else? How long do I keep saying “Its the hormones”?  Could this be delayed grief?  Losing my mum last year hit us hard, but with Ellie it was always hard to tell.  Could this just be processing now?

I’ve even found myself Googling, ‘Medications for Autistic children’.  Does she need something to help her?  I’ve read that Prozac has been prescribed in some cases… but Christ, if Ellie goes on the ‘happy sweets’ that would mean three out of four of us would be on it!! Yep… you read right!

This past year, both hubby and I have been taking anti-depressants. Last year was such a hard year after mum passing, and for me, after six months it really wasn’t feeling any easier (which is understandable) and it got to a point where the tiniest thing would be massive.  It was like going 0-60 in three seconds instead of slowly shifting your car up through the gears.

I have to say, whatever your school of thought is on antidepressants, for us, it was the best thing we did – it really helped me feel more ‘level’ and able to deal with things… albeit that I’ve now gone from being a Crybaby to an Ice Queen! Takes a lot to get the waterworks going now!

So, I’m thinking, if it has helped me so much, could it help Ellie?  Will it calm down the paranoia, the meltdowns, the aggression and the confusion?  I’m doing all I can with her diet, but the brain is a very powerful machine and sometimes, getting that extra ‘crutch’ really does make a difference.  Or maybe counselling is the way to go… or both!?  I definitely need to think about support groups for me and Ellie so lots to think about!

Anyway, today (Sunday) we are going to a Kidz Rock festival.  We’ve made arrangements to go somewhere quiet if it gets too much so we’re going to go (last night hubby was adamant we wouldn’t be going)  so wish me luck!!   I’ll probably blog about it later… lets hope it’s a happier one! 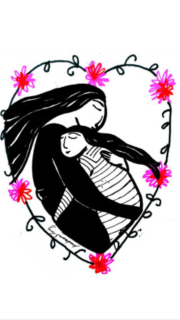 So, I've started a blog... mainly about everyday things... usually to do with Austism (Aspergers) and having a Tween with it. I'm blogging for me, as a form of therapy I suppose, but if I can help anyone out there, then that would be amazing. I'm a mother of two beautiful kids... who give a lot of joy and laughter and also drive me up the wall! Thank god for wine, that's all I can say! View all posts by Mother's Daughter

Rediscovering old toys. These puppets have been out for days after not being looked at for years! Have your children rediscovered old favourites during ‘lockdown’? . . . . #lockdownlife #lockdown #stayhomestaysafe #homewithkids #oldtoys #oldtoysarebest #puppetsofinstagram #puppettime