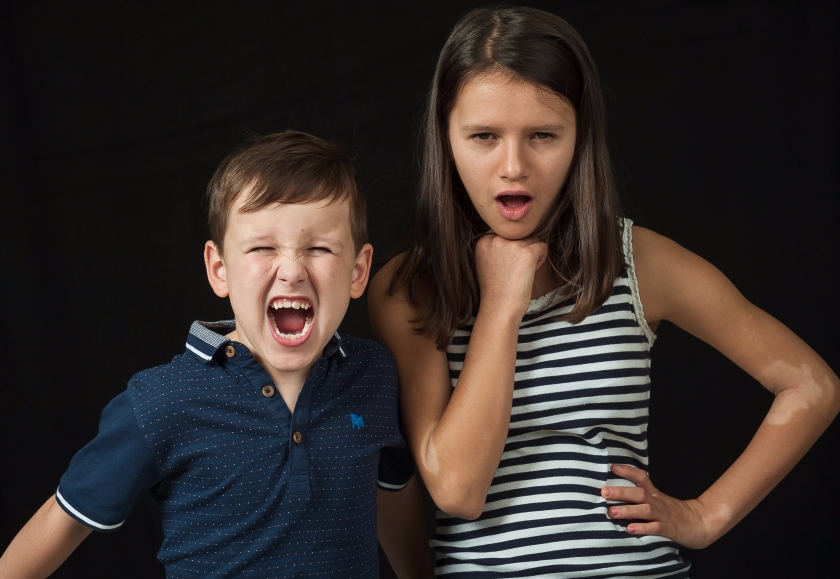 Wow! That’s a cynical title if ever I saw one!   This picture of the kids sums up our feelings of the whole process… and it makes me chuckle every time I see it!

It took two and a half years of consultants appointments before we had Ellie diagnosed at age five. During that time, only one consultant, the last one we saw, had some idea of what we were talking about in terms of Ellie’s virus, her food intolerances and her regression, but even then she couldn’t really explain it.

Some of the doctors we saw, I suppose you could say, were ‘old school’ and had very clear ideas of what Autism was – you were born with it and that is that.  We felt sometimes like they didn’t believe our ‘anecdotes’ of how we had no concerns and saw no signs of Autism until Ellie got struck with a virus and then regressed within weeks.   I felt like some crazy mother going on and on!   Other doctors were newer to the profession so were a little more open minded but also didn’t have any experience of seeing this before.

When Ellie was three or four, she had to go into hospital to have grommets inserted into her ear because she had ‘glue ear’ and during the operation we met with the Dietitian at the hospital. This isn’t usual practice, from what I remember, our appointment was meant to be the next day and she kindly saw us whilst Ellie was ‘under’.

It was the Dietitian that told us that she had first hand experience of seeing some (not all) children on the spectrum, improve when gluten and dairy was taken out of the diet, but there was a small window of opportunity to do this.  Finally! I wasn’t making this up! Why was nobody else telling me this? I get that this doesn’t work for everyone, and every child is unique, but I was willing to try anything if it meant less stress for my daughter.

She also told us the best consultant to see in terms of pursuing a diagnosis  – so the very next appointment we had with the Paediatric team we insisted on seeing this particular consultant.

During our time seeing the consultants, I kept an ongoing record, month by month of any improvements or setbacks we were seeing.  Ellie was also having speech & language therapy and records were also kept at her preschool.

When Ellie started reception class at age four, there was an additional classroom assistant to help Ellie – which unbelievably, we were fortunate to have until the day Ellie left Primary School some seven years later.  From speaking with other parents, we were very lucky to have this in place, even before the diagnosis.

We then had a few more appointments and the following year, during the summer term of her reception year, Ellie was diagnosed with high functioning Autism or Asperger’s.

Whilst this didn’t come as a surprise to us, it was a time I remember feeling like I was grieving for a good couple of weeks.  Ellie was no different because she had the diagnosis, she was still our gorgeous girl, but I was grieving for the little girl we thought we had and what we’d envisaged for her.  I couldn’t shake how I felt.  Thankfully, that feeling didn’t last and I soon got my ‘Warrior Mother’ head back on!

I don’t know what the state of play is nowadays for those seeking a diagnosis, but I’m curious to know if consultants still fail to mention any link with food and autism, or more so, gut health and autism.

Only yesterday at my Nutritional Therapist telephone appointment, she talked about the correlation between gut health and autism.  I remember back in the day, reading articles about ‘leaky gut syndrome’.  Ellie was severely constipated when we took her to the first consultant and he pretty much shrugged his shoulders! Is this still the case?

Whenever I speak to someone who has concerns about their child, I always ask if they crave certain foods.  Do consultants do this?  Nobody ever did with me.  Ellie would eat cheese like it was an apple and was addicted to Weetabix – the two food sources she was craving she should have been avoiding.

It was when I read ‘Louder Than Words’ by Jenny McCarthy, just a couple months into our journey, I knew we had to stick to this path.  Her son was experiencing something similar – though much more scary as he suffered terrifying seizures – but the elimination of gluten and diary had a profound effect on his symptoms. The day he showed his mum his swimming shorts and asked to go swimming was almost a carbon copy to Ellie taking her jeans from her pre-school bag, showing me and saying “Jeans”.  I cried and cried when I read that chapter.

Getting the diagnosis did feel final, but it wasn’t until we got the diagnosis that it opened up to more help and more knowledge and helping us do all we could for our daughter… and we’re learning each and every day!

My Tweets
Join 2,426 other subscribers
Follow Tales of a Mother's Daughter on WordPress.com