In my attempt to become a domestic goddess (its never going to happen!) I am dedicating my  Friday’s blogs to a ‘Free From’ recipe.  Firstly, it will give me the motivation to bake at least once in the week. Secondly, my new ‘Kitchen Mate’ that I treated myself to won’t be gathering dust considering I got it on the premise that I would save a fortune on supermarket free from foods and eventually get my money back!!! ;/

At Christmas time, we bought Ellie a book called ‘The Foodie Teen’ because Ellie loves to read recipes and they were all gluten and dairy free, so at least there was a chance that she could eat most of them (as long as they weren’t too fancy!).  So, whilst the boys in my life had taken themselves off to the local swimming pool, Ellie and I decided to do some baking – starting off easy with a shortcake biscuit recipe.

Now, don’t let the smile in the picture fool you… just before this was taken, Ellie was having a wobble because 1) I wasn’t getting the ingredients out quick enough which therefore meant she wasn’t helping me (!!) and 2) the biscuits we were making were going to taste rubbish as they were plain which obviously means they’re crap!   Food related meltdowns are pretty common around here!  I explained that Ellie shouldn’t judge them before she’d tried them but this fell on deaf ears.  So, in truth, not long after this photo was taken, she’d stropped off to her bedroom and I was left (in peace) to bake!

Thankfully, this was really easy to make – just put all the ingredients into the mixing bowl (or fancy Kitchen Mate!), mix together and then roll into a big fat sausage.  I added a teaspoon of cinnamon to this mixture to add a bit of spice but you could add citrus or dried fruit.  At this point you can either put it in the freezer and use at another time or cut into 1cm slices and bake. 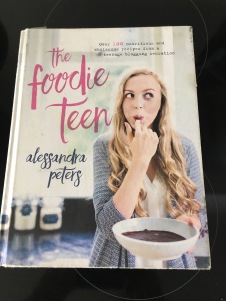 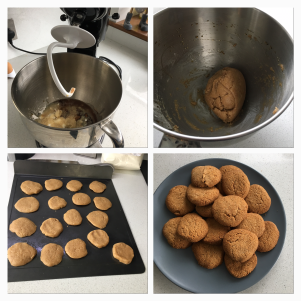 Fifteen minutes into baking and down comes a now smiley Ellie gushing at how amazing it smells!  After the frustration she’d caused me earlier, I was struggling to match her mood.  It’s like living with Dory (Blue fish – Finding Nemo) living with Ellie. She’d totally forgotten that she’d pissed me off not 15 minutes before!

Anyway, once the biscuits had cooled a little (just enough so our mouths didn’t burn) it was time for the taste test.  Thankfully they got the…

So not so rubbish after all then!!

In our quest to cut down on sugar to help with Ellie’s Yeast Intolerance (more about this next week) this recipe didn’t contain any evil white sugar.  It was sweetened by Maple Syrup which still isn’t great – so I might do some more Googling into what else we could use to sweeten it up (any suggestions welcome).

The recipe is from The Foodie Teen by Alessandra Peters.

My Tweets
Follow Tales of a Mother's Daughter on WordPress.com